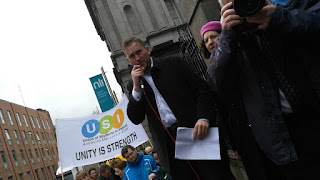 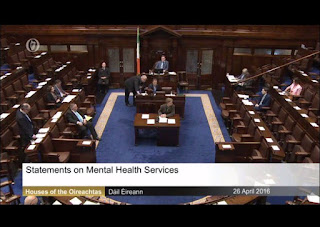 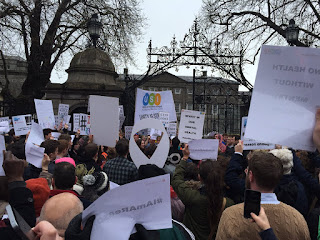 The message needs to ring out loud and clear from here today, it needs to ring out around the chambers of Dail Eireann and to our political leaders, it needs to ring out around our educational institutions and to our educational leaders,it needs to ring out amongst our sporting bodies and to our sporting leaders, it needs to ring out around our workplaces and to our business leaders,
the message needs to ring out that the responsibility to transform a culture and normalise the conversation around this area rests with all of them and all of us, that no longer and never again will the Mental Health and Emotional Wellbeing of our people be allowed to dwell in the shadows of repression and ignorance and be cloaked in secrecy and silence.
That a new dawn of hope is emerging and that this generation of Irish people are determined that in their time, the walls of stigma and taboo around Mental Health and Emotional wellbeing will finally be torn down and removed from Irish society.
To finish with, there is much fear that still surrounds this area but acknowledging that the power for transformation and meaningful change rests with each of us, individually and collectively, I’m reminded what the famous Polish physicist Marie Curie once said ‘There is nothing in life to be feared, only to be understood. Now is the time to understand more so that we may fear less.
Now is the time, in our era for us to understand more in this area and we owe it to the tens of thousands we have lost and are losing to suicide, we owe it to the families that are left to deal with the carnage after the loss of a loved one through suicide, we owe it those whom are living lives of quiet desperation and silent misery with inner darkness, grief, toxic levels of stress or anxiety,
we owe it to our Mothers and fathers, brothers and sisters, Grandmother and Grandfathers, friends, teammates and work colleagues whom courageously and kindly support those struggling with some aspect of their wellbeing,
we owe it to our children yet unborn to embrace the Mental Health and Emotional Wellbeing challenges of our nation, to deepen our understanding of depression, to deepen our understanding of suicide but more than anything and perhaps the most important of all, to deepen our understanding of ourselves.
By embarking on that challenging but liberating inner journey towards our real and authentic selves, we will succeed in producing the more meaningful and authentic connections and relationships that we all secretly crave.
The dream that dwells within the heart and soul of humanity is to come into harmony and inhabit the fullness of our vast and awesome true selves. As human beings, we have only scratched the surface of our immense potential and capacity to create a culture and society that is a nourishing force for human and social development that will maintain our personal growth and social wellbeing. That, along with what has already been said, will have a profound impact for this and future generations of Irish people when it comes to their Mental Health and Emotional Wellbeing.
None of us can walk another person’s path for them but we can certainly walk it with them. We have a sacred responsibility in this small but great nation of ours to walk it with each other.
Posted by Unknown at 10:10 6 comments: